If you’ve come to functional programming from an object oriented background, you may have found it hard to grok state in a functional system. You’re accustomed to creating and manipulating objects, but in functional languages everything is immutable. Often the answer to this problem is to use processes to store state. Elixir has an Agent which is a simple construct for storing state in processes. Let’s see if we can roll our own AgentSmith.

When you are first introduced to agents, they appear somewhat magical. You’ll think “If everything is immutable, how are agents mutated?” The key is: processes are mutable. This extends beyond Elixir. Processes consume memory, and this memory can grow as they allocate space for variables and such. By exploiting this quality of processes, they can be used to track changing state in an otherwise immutable sea of values.

A link is started to an agent, and the agent itself is just a process (see, it’s a PID). Then using update and get you may provide a function used to interact with the value stored in the agent. Keep in mind there is no constraint on the type of data that may be stored in an agent. You control how it’s changed and retrieved.

With this basic understanding of agents in Elixir, you’re ready to implement it yourself. It shall be known as AgentSmith, and it’s not as scary as it sounds. 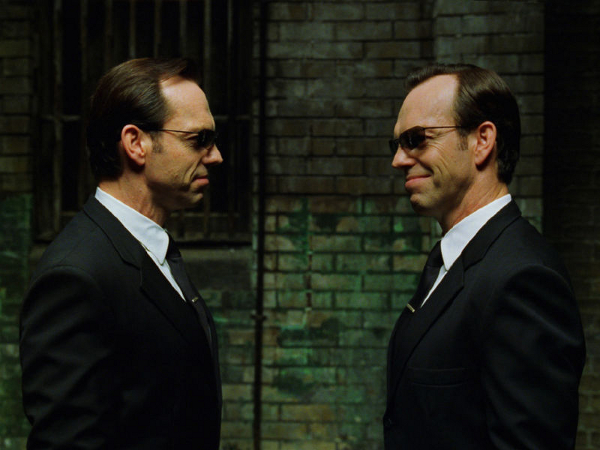 The first thing you need is an AgentSmith.start_link/1 function. You know that an agent is just a process, so spawn should come to mind. In particular spawn_link as it’s nice for errors to propagate to the parent process.

Focus on the spawn_link call for a moment. This creates a new process executing AgentSmith.loop/1 and passing in the argument list [value]. While a process is created at this point, it doesn’t do anything. It exits as soon as loop returns.

In order to interact with this process, it must receive messages.

Now the agent smith process will wait for a message to be sent to it. It’s time to implement the get message.

A process may now send a message to your agent to “get” something with the given function. As you can see the value is available as an argument to Agent.loop/1. However that value is in another process, so the only way to get that value back to the caller is to send it back in another message. (Hmm, sending messages. That sounds familiar to some OO programmers… conceptually, yes, but this is friggin’ parallelism!) In order to send a message back, you have to know who called…

Perfect! Now to send back the value…

Now the “get” message responds by sending a message back with the value to the caller. The caller receives the value and it’s implicitly returned.

One thing’s missing here. After a “get” message is received, the agent process exits. This is because there is no implicit looping in a receive block. Keeping the agent going is as simple as recursing on the loop with the agent’s value.

Getting the value from an agent is fine and all, but state isn’t being manipulated. Let’s implement the “update” message.

The AgentSmith.update/2 implementation is surprisingly simple. The magic is in the recursion. Since the func argument takes care of performing the update, it’s sent to the agent and used to update the value passed to the next recursion. Now the next “get” request will be processed by a call to AgentSmith.loop/1 with the updated value.

That’s it? YES! The state is represented as a series of translations applied to the original value passed to the agent. Let’s try it out.

The interface isn’t exactly like Elixir’s Agent, but it gets the point across. For good measure, here’s the full implementation.

This is certainly overly simplified in comparison to Elixir’s Agent (which uses GenServer), but fundamentally it’s a great illustration of how to pull off state in a functional system using processes. What do you think??